Biryani the One Pot Marvel that’s Taken the World by Storm!

Biryani is a beloved dish that many of us eat as a go-to when ordering our Indian food. However, where did this delicious curry that we love to serve at Purple Poppadom originate?

It is believed that it was a dish imported to India by travellers and merchants. It seems that the debate continues, but many say that it began in Persia as a rustic rice and meat dish and travelled to India. 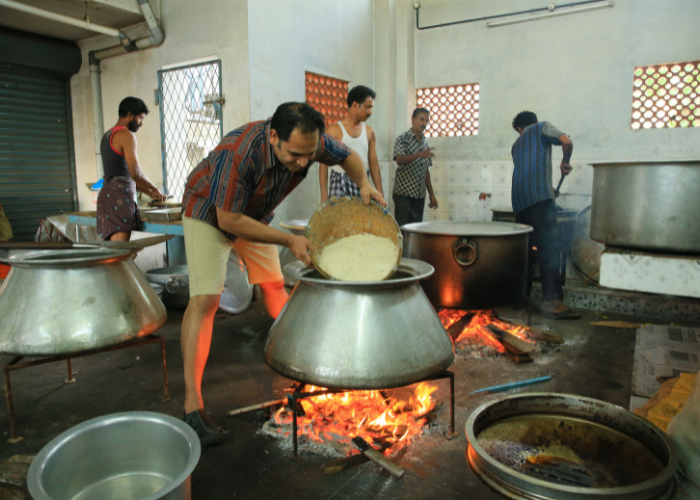 It had been considered a festive dish at the court of the Mughal emperors. Usually based on basmati rice, meat, vegetables, eggs and especially spices. Many variations exist depending on the region.

Either way, it is a delicious dish that many of us love! Legend has it that it was a military dish in medieval India. The armies, unable to cook complex meals, would prepare a one-pot dish, where they would cook rice with the meat that was available.

British-era writer Abdul Halim Scherer mentions the following as their main difference: “Biryani has a stronger curry rice flavour due to a greater amount of spices.”

Did you know that Chicken Biryani was the “Most Ordered Dish” in 2018 on online platforms?

It is a dish that ticks every box. It is rich in flavour, it is a balanced meal and it is also a great value curry that offers you a real taste of India. Not only that, but there is a real taste of healthiness to this dish which we will soon get to.

Now that we know its roots are famously fixed in the east, we should learn a little bit more about what makes this such a popular choice. 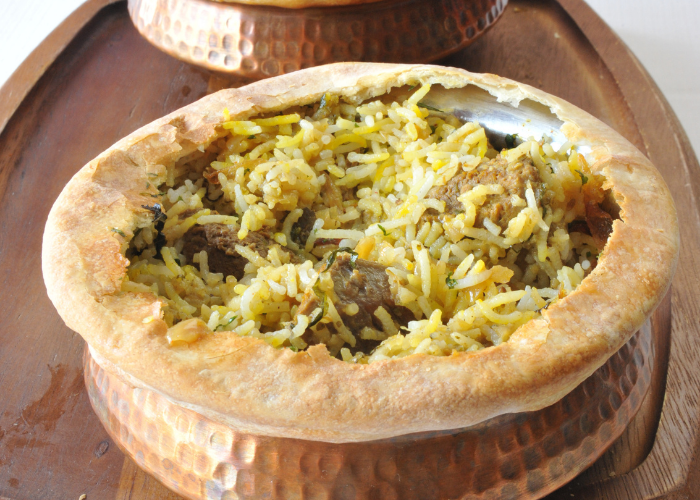 It is a dish of the sub-Indian continent made from rice (usually basmati rice), prepared with hot spices, meat, eggs or vegetables.

The name is derived from the Persian word beryā, which means “fried” or “grilled”. Local variations of this dish are popular in South East Asia and also in the Middle East.

With this article we have a wonderful photo of Purple Poppadom’s Chef Anand George, cooking a Birynai for mass-catering, on a visit to India in 2016.

Dindigul’s version is the only one from a Hindu community, the Naidus of Andhra Pradesh. Some differences are subtle while others are a little stronger by using added or substituted ingredients.

In Sri Lanka, this is Buriani, a language word derived from Buhari Biriani. In many cases, the curry from Sri Lanka is much more intense than most Indian varieties. Toppings may include achcharu (pickle), cashew curry and mint sambol.

The most common varieties of rice used for this dish were long-grain brown rice (in North India), samba rice (in South India). Today, basmati rice is the most widely used and widely loved.

The spices and condiments used in Biryani are but are not limited to ghee (clarified butter) or simple butter, cumin, nutmeg, mace, pepper, cloves, cardamom, cinnamon, bay leaf, coriander, mint, ginger, onion and of course, garlic.

The more elaborate varieties include saffron. In northern India, Pakistan and Bangladesh, Biryani contains meat. However, in different coastal regions, you will find fish and shrimp, while inland areas may incorporate chicken or beef.

You will find different types of Biryani curries. One of the most beloved of course is the Kerala style as served at Purple Poppadom Indian restaurant in Cardiff.

Traditional in taste and flavour, served under a flaky crust. The richness of fragrant spices and homemade Raita naturally make this a wonderful choice for people to try. Kerala is a region in India famous for its flavourful curries. Some of the other types of Biryani curries include:

Calcutta/Kolkata Biryani – This Biryani mainly uses potatoes and eggs and only sometimes contains meat. It is much lighter in terms of spices; The marinade is made from cinnamon, nutmeg, cardamom, cloves, and other spices, and the rice is flavoured with ketaki or rose water and is yellow in colour. 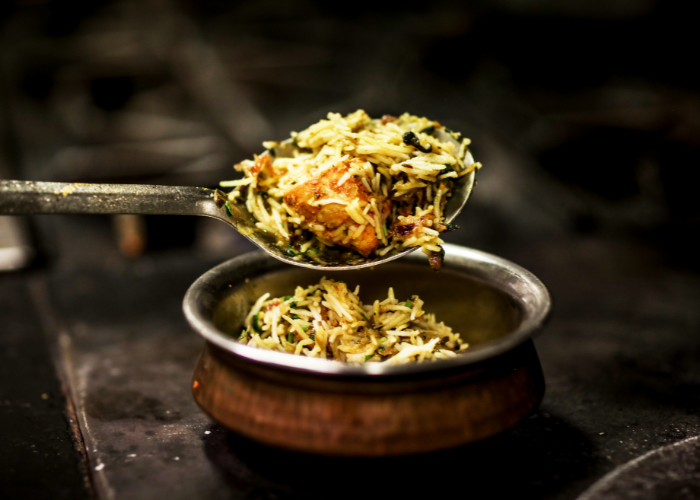 Biryani being prepared in the Purple Poppadom kitchen

Ambur Biryani – This leather tanning town in Tamil Nadu produces one of the most famous types of Biryani, and the town has more Biryani shops than any other city in the world. The meat and rice are cooked separately and then put together with mint leaves and curd.

Lucknowi Biryani – This is based on a Persian style of cooking, so it uses the dum pukht method (slow oven cooked) in which the meat and sauce are only partially cooked and then layered and served in a sealed ‘handi’ pot. The spice profile is not that intense.

Mughlai Biryani – This is cooked with curd, chicken, almond paste, ghee, dried fruit, and green chillies, and has a rich flavour.

Kalyani Biryani – Small pieces of buffalo meat fall into this form of Biryani.  It is rich and flavourful, but does not include more expensive ingredients.

What makes it so popular?

Many claim Biryani is so popular because of its rich taste. It is also a hearty and filling curry that is packed with so many flavours. It is also part of rich Indian culture and history.

It is a healthy dish; Basmati rice, for example, is a healthy carbohydrate and along with proteins and vegetables, provide plenty of nutrients.

We are delighted to serve and celebrate the wonderful dish of Kerala-style Biryani at Purple Poppadom and we offer not one, but four different choices; Chicken tikka, lamb, vegetable and prawn.

It truly is a delightful dish that will continue to be a favourite for many years to come! 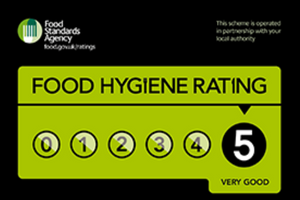